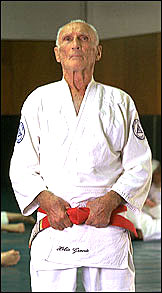 On Tuesday morning Grand Master Helio Gracie was tanning at his ranch in Brazil, and on Thursday morning at 9:15 he passed on due to natural causes. His legacy will survive forever in all members of the Gracie Family, jiu-jitsu practitioners around the world, and all those who have benefited from the revolution he began.

In his final years, the creator of Gracie Jiu-Jitsu often spoke of his satisfaction with his life’s work. He openly stated that he had accomplished everything he had set out to do, displaying his preparedness for the transition into the afterlife.

The Grand Master believed that such a transition should be seen as a positive step in one’s spiritual evolution. In a recent interview he declared: “I’ve already told my sons that when I die I want there to be a party. No drinking, no debauchery.”

To honor his request and his legacy, the Gracie Academy will host a celebratory gathering/slideshow presentation on Saturday, February 7, 2009. In anticipation of a large turnout of friends and family, we intend to have three showings starting at 4:00pm, 5:00pm and 6:00pm. If you can’t make it to the party, but would like to express how the Grand Master has affected your life, please send your story toheliogracie@gracieacademy.com so we can post it on the Gracie Academy website.

In one of his final magazine interviews the Grand Master expresses his concern for the future of Jiu-Jitsu:

“The Jiu-Jitsu that I created was designed to give the weak ones a chance to face the heavy and strong. It was so successful that they decided to create a sportive version of it. I would like to make it clear that of course I am in favor of the sportive practice and technical refinement of all athletes, whatever their specialty may be, as well as good nutrition, sexual control, avoidance of addictions and unhealthy habits. The problem lies in the creation of a sport-oriented Jiu-Jitsu, based on rules and time limits, which benefits the heavier, stronger, and more athletic individuals. The primary objective of Jiu-Jitsu is to empower the weak who, for not having the physical attributes, are often intimidated. My Jiu-Jitsu is an art of self-defense in which rules and time limits are unacceptable. These are the reasons for which I can’t support events that reflect an anti Jiu-Jitsu.”