From its humble beginnings twenty years ago, mixed martial arts has grown into a multi-billion dollar industry. Chief among the world′s leading mixed martial arts organizations is the Ultimate Fighting Championship (UFC) which is making its way to the top of the sports food chain, dwarfing boxing and nipping at the heels of the NFL. And fighter-turned-author B.J. “The Prodigy” Penn has been one of the few chosen to lead the greatest fighting generation.

In WHY I FIGHT, the controversial Penn will, for the first time, bring MMA fans into his remote and insular world on the Big Island of Hawaii, where he lives and trains and give them an in-depth look into the complex mind of a man beloved by all peace-loving Hawaiians–who devastatingly imposes his physical will on opponents and then brazenly licks their blood off his gloves.

Penn will recap his journey from his days as a 17-year-old Brazilian Jiu-Jitsu prodigy, street fighter, and reckless party boy in Hilo, through his current status as a celebrity and world class competitor. Along the way he will discuss his controversial views on the UFC, his crazy yet heavily influential family life and how he came to embrace the Hawaiian Warrior spirit, and he will do so with the passion, wry sense of humor, and candor, that has made him one of the most loved, feared, and provocative athletes in the world.

If you are ordering an Autographed Copy, specify your personalized inscription by using the “Autograph Inscription” area above.

Please keep in mind that there may be delays in the processing of your personalized copy due to BJ’s schedule.

Real Gold Does Not Fear the Fire:

the Teachings of Grandmaster Wai-lun Choi

This new book is about the life, teaching, and insights of Grandmaster Wai-lun Choi, the designated Grandmaster and lineage-holder of the Six Harmony Eight Methods style (Liu Ho Ba Fa). Featuring numerous articles, interviews, notes, photos, and history, you will be guided through the maze of martial arts, meditation, and Chinese history and culture to arrive at the door of mastery, embodied by Master Choi?s own story and accomplishments. This must-read book will be a valuable addition to the library of anyone interested in martial arts of any kind.

In a 50+ year career of high falls and fist fights, “Judo” Gene LeBell has crashed cars, jumped motorcycles, wrestled bears, incited riots and fought some of the toughest men in the world. He was an AAU National Judo Champion and a Professional Wrestling World Heavyweight Champion at a time when wrestling was more about survival than show business.

In this ONLY authorized autobiography, Gene gives us an insiders view of his childhood, movie sets, wrestling rings and Japanese dojo where he made his living and built his reputation by dishing out pain and punishment.

He was there during the “Golden Years” of martial arts growth in the U.S. and shares intimate experiences with legends like Sugar Ray Robinson, Muhammad Ali, Elvis Presley, Ed Parker, Bruce Lee, Andre “The Giant,” Lou Thesz, Hulk Hogan, George “Superman” Reeves, Burt Reynolds, Chuck Norris and many others.

The World’s First Book on Grappling with a Club. Non-Striking Techniques.

The following is an excerpt of writing from LAPD training officer Steve Uhrig about Gene LeBell and why he is qualified to be instructing law enforcement officers:

In today’s Law Enforcement and security training, there are many concepts and training programs offered to teach how to control and arrest someone. The terms “Control” and “Pain Compliance” are used all the time. Both of these can be separate theories of techniques or they can be combined.

Gene LeBell, a true martial arts pioneer, legend and police trainer, understands the need to give safe and effective training to law enforcement and security officers. Control can be used in many forms:
1. To stop an individual from being aggressive.
2. To maintain order of an unruly crowd.
3. To hold someone that is being arrested without injury to himself or herself or officer.

The term “Pain Compliance” is primarily used when officers are using arrest techniques in order to get the individual to “Comply,” thus putting them in “Control.” When officers use a joint lock on someone, initially it can cause some kind of pain. I use joint lock here to refer to techniques used to control someone by locking their shoulder, elbow or wrist joint. Depending on the amount of force used by the officer, results in various levels of pain to the subject. How these two terms are used together, is during everyday control and arresting someone. Officers can put a control technique on someone without causing pain. Usually pain can result from one of two situations:
1. The subject is very aggressive and because of body movement, pain is caused to the individual when the officer uses a joint lock.
2. The officer has the individual in control using a joint lock and the subject decides to resist this control attempt. This is when the subject causes his own pain, not the officer.

Gene LeBell has invented and taught some of the best control techniques that Law Enforcement and Security Officers can use. Sure, pain can be caused applying any kind of technique. But Gene’s techniques are used for ultimate control. Again, people have to realize the variations and causes noted above as to whether or not a technique will cause pain.

Gene’s phrase “Pain is weakness that is leaving the body” is used when training in the gym. Officers need to train hard in arrest and control techniques to endure the pain they often endure while arresting someone. Hard training in techniques offered by Gene LeBell will certainly ensure officers are “Staying Alive on the Street!™”

The techniques shown in Pro-Wrestling Finishing Holds are the most decisive ways of winning a wrestling match. The unique advantage of being a master of finishing holds is that you do not have to be bigger or stronger than your opponent to win. It is the use of leverage and knowledge of technique where you gain the advantage over size. Many times it is the opponent’s own struggle that increases his pain and insures his continued entrapment.

Whether it is your desire to learn them for professional matches, self-defense on the street or just to expand your own personal knowledge in the science of the fighting arts, Pro-Wrestling Finishing Holds is an invaluable tool. It is the first book of its kind demonstrated by a master of these moves.

These holds do work. Practice them with a friend gently, but only in the presence and under the guidance of a qualified instructor.

BJJ Championship Techniques
Championship Techniques presents readers with the most important drills and positions in the sport?positions that, when mastered, will give them the tools they need to win in competition. Jean Jacques includes insights on strategy, mindset, and objectives that facilitate a winning attitude. Also shown are small changes in holds and positions which make the difference between victory and defeat. A devastating supply of moves that will catch opponents off-guard and end fights quickly.
Jean Jacques Machado with Kid Peligro, 250 pages

Gene LeBell is one of the greatest submission grapplers to ever wear a pair of wrestling tights or judo gi. What he has forgotten about grappling would make anyone an expert. Judo Gene is known as a master hooker and shooter in professional wrestling – a hooker is a wrestler who specializes in finishing holds, while a shooter is a wrestler who grapples for real. 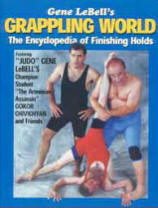 This book has taken Judo Gene years to write, and it is his legacy to the world of grappling. It is a massive text on the art of finishing holds, and contains 520 pages outlining in great detail more than 1,000 finishing holds. Among the 500-plus pages are chapters on grips and handles; catches and grabs; foot and leg controls; arm bars and shoulder locks; wristlocks and twists; straight leg locks; ankle bends and twists; chokes; and neck locks and cranks. Many of the techniques shown in the volume are old, never-before-seen pro-wrestling techniques. These holds were used by the Ancient Greek and Roman pankration grapplers. This book explains why Gene LeBell is known as “The man of 10,000 finishing holds.”

Never in the long and storied history of grappling has such a technical treasure been available to the general public. It is doubtful there will ever be another grappling text containing so many unique and devastating finishing holds, unless Gene LeBell pens a sequel.

This is the best book ever written on the art of submission grappling. This manual is a must for all serious martial artists, self-defense students, and grapplers. ” Author Tom Meadows takes us through the history, construction and use of the Filipino fighting whip in this unique work. Drawing from personal training as well as many outside sources, including famed practitioners such as Dan Inosanto, Cacoy Canete, Snookie Sanchez, Anthony DeLongis and others, Mr. Meadows has written a fine reference guide and training aid for the martial arts community. Included are many photos to go along with his personal expertise, as well as valuable experiences training with many of the whip masters and martial artists, including Eric Knauss and Marc Denny of the Dog Brothers, and Larry Hartsell.

Due largely to its effectiveness, Escrima is one of the world’s most popular martial arts systems. Grandmaster Leo M. Giron designed this method to overcome a larger and stronger opponent in life-or-death encounters. Giron’s escrima contains many ingenious exercises and strategies while remaining the essence of simplicity. Giron’s Escrima knowledge has been in great demand by thousands of Escrima, Arnis, and Kali students from all over the world – and now for the first time, the original work of Grandmaster Giron is brought to the public with the most comprehensive information ever published in an Escrima book. Packed with photos taken with painstaking care to ensure correct positioning and execution, this volume covers all of the fundamental and advanced principles as taught by the late Grandmaster Leo M. Giron.

Leo M. Giron was a World War II veteran and was awarded the Bronze Star medal amongst many other citations. As the head advisor and also the founder of Bahala Na Martial Arts Association, he was world renownded as the Father of Larga Mano in America. Until the last day of his life, Grandmaster Giron was active and teaching at his home based school in Stockton, California. His knowledge of jungle warfare was an invaluable asset to those who trained with him. His appearance was that of a humble man with the character of a distinguished college professor. Grandmaster Giron talked, looked, and carried himself with an uncommon class and style.