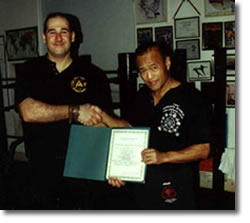 Tuhon Bill McGrath began his training in the Pekiti-Tirsia system under Grand Tuhon Leo T. Gaje in 1975 at the age of 14; and received his 1st Level Instructorship (Guro) at the age of 20. In 1982 Grand Master Gaje moved his family to Texas and invited Guro McGrath to operate the National Headquarters School of Pekiti-Tirsia with him. Guro McGrath operated the National Headquarters School from 1982 to 1985. In 1985 he returned to New York and was offered a position as a New York State Court Officer. In 1987 Guro McGrath was promoted by Grand Tuhon Gaje to the rank of Maginõo (Elder). In 1994 Grand Tuhon Leo Tortal Gaje promoted Mr. McGrath to the rank of Tuhon Guro (Chief Instructor), the first person outside the Tortal family to attain such rank in the Pekiti-Tirsia System. In 1994 Grand Tuhon Gaje and Tuhon McGrath formed Pekiti-Tirsia International, the governing body for practitioners of the Pekiti-Tirsia International System worldwide.

For more information on the Tuhon McGrath and the
Pekiti-Tirsia system, please go to: http://pekiti.com/