In The Tao of Jeet Kune Do, Sijung Bruce Lee stated, “Cultivate your awareness by imagining an opponent attacking you – while you are sitting, standing, or lying down, etc. – and counter that attack with various moves. Simple moves are the best.”

Enter Clay Johnson. Born August 10, 1961 in Clifton Forge, Virginia, Clay was born with cerebral palsy, a motor function disorder caused by a permanent, non-progressive brain lesion or defect present at birth. Cerebral palsy may result in a variety of manifestations including, in Johnson’s case, quadriplegia. Johnson has the use of his hands and arms, as well as a very strong neck. Clay is able to walk on crutches, but otherwise has very limited use of his legs. 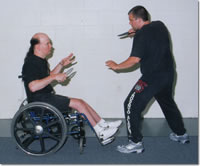 Johnson states that he was approximately five or six when he first realized that he was different from other children, adding that during his school years, he did not have many friends, often being ostracized and even bullied.

Around the age of 10, Johnson became interested in the martial arts. When asked what factors influenced his interest, Johnson states, “I was watching a late night sports special on ABC and there was this amputee guy in a wheelchair that took out five or six other guys in a demo, and I thought to myself, I could do that.? Also around that time, Johnson states that his father took him to the movies to see “Fists of Fury” with Bruce Lee.

Finally deciding to pursue training, Johnson’s initial search was unsuccessful. He states that there was a school in the area and his uncle was willing to pay. However, he was not accepted at the school because of his inability to kick. After this initial setback, Johnson says that he did not pursue training again until approximately ten years later, when he was in college. Clay says, “I was taking administration of justice courses and thought that it would be good to incorporate some martial arts techniques.? This time his search was more fruitful. He found Jimmy Mays, a local tae kwon do instructor, who accepted him as a student. Clay trained under Mays for approximately one year, at which time, Mays was involved in an automobile accident and unfortunately had to quit teaching. After searching somemore, Johnson began studying American freestyle karate, eventually earning a second-degree blackbelt under Eddie Thomas. 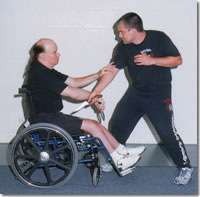 Wanting to add to his training, Johnson had heard that Guru Dan Inosanto taught regular seminars in the region. On April 1, 1989 Clay, attended his first seminar under Guru Inosanto in Charlotte, North Carolina. During this seminar, Johnson was impressed on how Guru helped him personally on many of the techniques being taught, even to the point of pulling up a chair himself to see how the given technique could be performed from a sitting position.

Johnson was immediately drawn to the arts being taught by Guru Inosanto. This was due in part because they were so different from his previous training in karate, but mostly because the use of the Filipino weaponry opened up a new world for someone who does not have the use of the lower body. After the seminar, Johnson had a new goal: to begin training in the Filipino martial arts and Jun Fan Gung Fu as taught by Guru Inosanto.
After a few seminars, Johnson began training under Guru Rob Kelly in Charlotte, North Carolina once a month. Johnson asked Kelly if it would be possible for a handicapped person to become an instructor. Kelly said yes, but the process could take at least five or six years of rigorous training. Johnson then sent a letter of intent to the Inosantos expressing his desire to become a candidate in the instructors program. Over the next five years, Johnson attended every seminar that he could, and made regular training visits to Rob Kelly and other JKD/FMA instructors and practitioners in the region.

Johnson states that at times he became frustrated, but continued to work toward his goal. Clay realized that he must not only do his best to become proficient in the techniques that he could execute, but also have a clear understanding of the footwork in order to properly teach others. During this period, Johnson also began training in Muay Thai under Adjarn Chai Sirisute. According to Johnson, he was always curious about Muay Thai and went to one seminar just to watch, thinking that with all of the kicking involved, it would not be worth the time to actually train. Before the seminar began, Adjarn Chai walked over to Clay, introduced himself and informed Clay that he would be training. At Adjarn Chai’s request, Clay began training in Muay Thai as well. Johnson recalls that at a seminar in 1992, Adjarn Chai told him on Saturday that he would be taking his instructor’s test on Sunday. Not knowing what to expect, Johnson said that he became so nervous, he just wanted to go home. The next day, Johnson was given a lengthy written exam in which he had to detail the history and techniques of Muay Thai. His anxiety was prolonged because he had to wait for several months before he learned that he had passed.
On July 1, 1995, Clay Johnson received his certificates as an apprentice instructor in both the Filipino Martial Arts and Lee Jun Fan Gung Fu. When asked to describe his feelings at the time, Clay says, “Well, it’s kind of funny to see a 33 year old guy cry!”

Most recently Johnson attended a JKDU seminar held by Sifu Burton Richardson. Training against a resisting opponent was the key element of the seminar, and Johnson fought against aggressive opponents in all ranges. In order to simulate a potentially very real danger in a street situation, Sifu Richardson had Clay pulled out of his chair and wrestled down to the mat by a resisting opponent. Impressed by the emphases on ?aliveness training,? Clay has since joined Sifu Richardson’s Jeet Kune Do Unlimited Organization as well.

Johnson has been operating American Freestyle Martial Arts Academy in Covington, Virginia since January 1990. According to Johnson, he often gets strange looks when new students enter his school for the first time and realize that he is the instructor. Sometimes receiving criticism, Johnson states, “Don’t ever let anybody tell you that you can’t do something until you try it for yourself!” Johnson goes on to say that he often takes cues on how to conduct himself as an instructor and as a person from Guru Inosanto.

Sijung Bruce Lee has been quoted as saying, ?Training deals not with an object, but with the human spirit and human emotions.?

When asked about future goals, Clay says that he only wants to improve as an instructor: ?When I first started this, I never thought that I could go any higher than associate instructor, but now I want to keep on going”.