When I started training at the Inosanto Academy (a while ago…) I never thought I’d meet my wife there; I just wanted to learn how to fight! I came from a traditional Japanese martial arts background of Karate, Judo and Aikido, with over a decade spent in those arts) but after joining the Academy, I quickly realized that my training, while enjoyable, wasn’t the most appropriate for real combat. After years of hardcore training later with Damon Caro and Chad Stahelski, I recognized that fighting is pure improvisation and much easier than most people think. Either he’s better than you or you’re better than him – that day. Like Guro Dan says, even hall of fame baseball players strike out 2 of 3 times at bat.
Constantly intrigued by the fight, I find myself also interested now in finding where and how all of the above unite: the point where the look of the art, the range required for the technique, the appropriate and possible counters to the technique, and the simplest line from A to B to accomplish all. Where does effectiveness join simplicity–the nearest humans can come to perfection. This deeper quest has been made more possible through my relationship with my wife Suzanne.
Martial arts are a way of life for Suzanne and me. One of the most foundational aspects of our relationship is the fact that we both love martial arts. When I say “love” I mean LOVE. I simply couldn’t be married to someone who didn’t share my passion for martial arts. It just wouldn’t last. Between the two of us, Suzanne and I train for a combined 30 hours a week. That’s just training time, not teaching! In addition to fitness and self-defense, our training is also a path of introspection towards self-perfection, a long journey indeed. A newer student’s foundation in martial arts, gleaned from a few years of training and teaching, is barely the beginning and should never be confused with a true depth of knowledge. Getting to the nitty gritty – the core of the movement – that is the true challenge, and it takes considerable time, effort and perseverance. Having a relationship that nurtures this thirst for knowledge makes such extensive training both possible and fruitful.
Through my marriage, I am able to improve myself as a martial artist in ways that I otherwise would not be able to if not for this relationship. Some men are threatened by women who can fight; they don’t like being “shown up” by a girl. Years ago Lucia Rijker taught me how ridiculous that mindset could be with a single left hook to the body. I remember that punch clearly to this day, and am in fact eternally grateful to her for showing me the beauty of the body hook. I have employed it many a time myself over the years since eating that one!
Although I was Suzanne’s first instructor at the Academy, after many years of training and hard work, she has become an instructor herself and does certain things better than me. As a man, it’s easy to focus primarily on the brute force that can be applied for the desired result. My challenge is often times is realizing the artistic qualities of an art more so than the fighting aspect. The “look” is something that eludes me and is something at which Suzanne excels. I appreciate the importance of grace of movement, though I still rarely display it! However, the smart person doesn’t continue to rely on his strengths, rather he improves his weaknesses. Like Sifu Francis Fong says, “You don’t want to compete head to head, you want to use competition as a means for self-improvement.” Being married to Suzanne helps me clear that competitive hurdle on a daily basis and work towards self-perfection, constantly avoiding the ego and its pitfalls.

I am the luckiest girl in the world. Truthfully, I could end my portion of this article there and be very satisfied.

Training with my husband, John Spezzano, is one of the great joys of my life. I have said this over and over again…I can be having the worst day and I’ll walk into the Inosanto Academy and start the night’s training and my problems and woes will inevitably disappear. Pretty powerful stuff: Now take that kind of power and couple it with the person you love most on the planet being there with you, and well, frankly, it doesn’t get a whole lot better than that.

For me, martial arts is a way of training my mind and body. Stripped down, it is one of the most honest things you can ever participate in. Once you walk on the mat, it no longer matters what kind of car you drive, who your friends are, or if you have the next big hit screenplay (forgive me, I live in Hollywood.). What matters is how well your body is moving on that day. That’s it, no hiding! To participate in something so honest with someone you love and trust, sharing your successes and your failures, giving each other help and perspective, well, I’d be hard pressed to find a better way to stay real and be in the moment with each other.

No one walks into the academy knowing everything. There is a learning curve for even the most talented and naturally gifted. How great to witness your spouse improving; you get to see progress, or maybe as in my cases, you’re the one who has the longer way to go. Who better than your spouse to cheer you on, to give you advice, to want more than anyone for you to succeed?

Sometimes I am a very slow learner. I can be pretty dense. John will see me struggling and he will find a way, a phrase, an adjustment in how I’m standing; he’ll find the something that will make whatever I am struggling with crystal clear. He’s such a great teacher that way. With as much knowledge and experience as John has, he still listens when I talk about the artistic side of a technique. He can kick my butt six ways from Sunday, but still values when I say, “If you bent your knees a little more it would look better.”

On a practical level, I personally don’t believe in the romanticism of the damsel in distress scenario. What I think is way more romantic than being “saved” by a knight in shining armor is my standing next to John, and should something go down, being an asset – not a liability. Now that’s romantic. 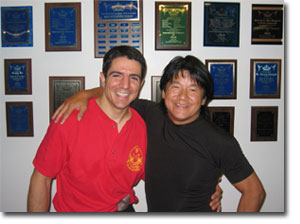 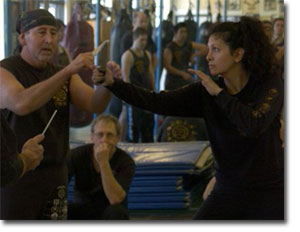