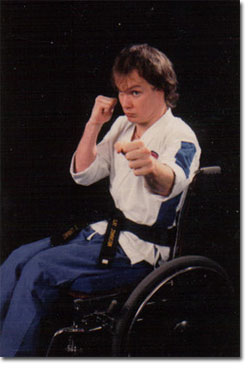 This article is about being a disabled martial arts instructor.  As of March 1, 2007, I’ve been teaching the martial arts for 20 years.  I would like to tell you the story of how it all started.

I started studying martial arts in 1981 under James Mays, who was teaching Tae Kwon Do in the area at the time.  I trained with him for a year. I never received any rank in that art; Mr. Mays had to stop teaching, because while he and his family were on vacation, they were in a car accident.  He injured his neck, and it left him unable to train or teach for a long time.

I had been looking for another teacher for quite awhile, when in  December of 1983, my girlfriend and I were Christmas shopping in Salem, Virginia, and we happened to drive by a new school that had just opened: “American Freestyle Karate.”  The school was owned, and still is, by Eddie Thomas.  We went in to check and see if they might accept me as a student. The answer I was expecting was No.”  To my surprise Mr. Thomas said, “We’ll give it a try.”

The art of American Freestyle Karate has 3 arts in it: Shotokan Karate, Tae Kwon Do, and American Boxing.  At first, my training with Eddie was one-on-one, once a week.  The trip to Salem is 50 miles each way, but as time went by, I tried to make it over more than once a week, and Eddie and I became good friends. In the summer of 1986, Eddie came to visit me on my birthday. I had known him for 3 years by this time, and had become a blue belt.  This was the first time he had visited my hometown of Clifton Forge, Virginia.  Clifton Forge and the surrounding area has a population of about 5,000 people.  The first thing Eddie asked me when he got to my house was, “What is there for people to do in such a small community?”  I said, “Not too much.”  There were a few movie theaters at the time, but not much else.

I had mentioned to Eddie about a year before that I wished the school was closer to home so I could come to class more often.  After his visit, I didn’t think too much more about what he had asked me, until a few months later, when he asked if I would be interested in starting a karate school with him, in my hometown.  I remember thinking that would be cool!  Eddie told me he thought that if we both put in $3000.00, we could start looking for a place for the school.  Since I didn’t have that kind of money, I had to ask my mom and dad for the money.  My parents were not really sure how a karate school would do in such a small town, and they didn’t know if they could trust Eddie to put in his part of the money. They liked Eddie, however, and were very thankful for what he had done for me so far teaching me karate.  I think they thought that  if the school failed, it would really hurt me, while Eddie still had his other school in Salem, and could go back if the Clifton Forge school  closed.  I remember telling my parents I thought I could do this and asked them to please let me try.

They agreed to give me chance, but they were still worried. Still, by the middle of February 1987, we had found a place for the school.  We held a day of demo’s on Saturday, February 27th.  Two hundred people visited the school that day.  We gave everyone the first week of classes at no charge, to let them try and see if they would like it before signing up.  (I still do the same thing today, because I know I’m not the right teacher for some people.)

We opened for business on March 1st. 27th.   After the first week, we had a little over one hundred people sign up for class. As I recall, Eddie taught most of the classes the first month, and I taught a few.  Mostly, I answered the phone, signed students up, sold uniforms, etc. and learned the ropes about running a school.

The first class that I did teach, I remember Eddie wheeled me out on the floor and he said,  “OK, teach.”  Needless to say, I was scared to death to teach a class by myself.  I have to admit that first six months of teaching classes were terrible, awful and really bad.  You have to remember that I was still only a blue belt at the time.  I guess we could say it was “on the job training.”

The first year and half, the school did very well for being in such a small area. During this time, Eddie ask one of his brown belts to help with teaching duties.  This went on for about six months until the brown belt got tried of helping me, and felt he wasn’t getting paid enough.  By then, I had  my brown belt, and my teaching was much better.  I also noticed I was becoming a much better martial artist as well, and was becoming more intoned to my students.  For example, I can look at my students today and be able to help them fix a problem, such as doing a kick correctly.  I have had other instructors visit my school, see me do this, and say “How do you do that?”

The Clifton Forge School closed in December of 1989 because of declining enrolment, but five black belts came out of that school.  In the spring of 1989, I met Guro Dan & Simo Paula Inosanto at my first seminar with them.  That seminar changed my way of thinking about martial arts, and my place in it.  After the Clifton Forge school closed, I started a martial arts club, from 1990 to 1996.  Since June 1996, I’ve  have had my own academy, and eight black belts have came out of this academy so far.

In my 20 years of teaching, I’ve learned a lot about myself, and people in general.  I have met, and had the chance to train with, some of the very best martial arts teachers in the world today.

Before I conclude this article, I would like to thank my parents, who are no longer with us, for believing in me; Eddie Thomas for helping open my first school (I don’t think he ever believed that I would become the teacher that I an today!); Simo Paula Inosanto (I think she always knew I had it in me – thanks for giving me a kick in the butt when it was needed!) and my girlfriend of 25 years, Kimlee Reid, for being with me in good and bad times, and believing in me without question.

I believe I am a good teacher – not great – but give me another 20 years and we’ll see!