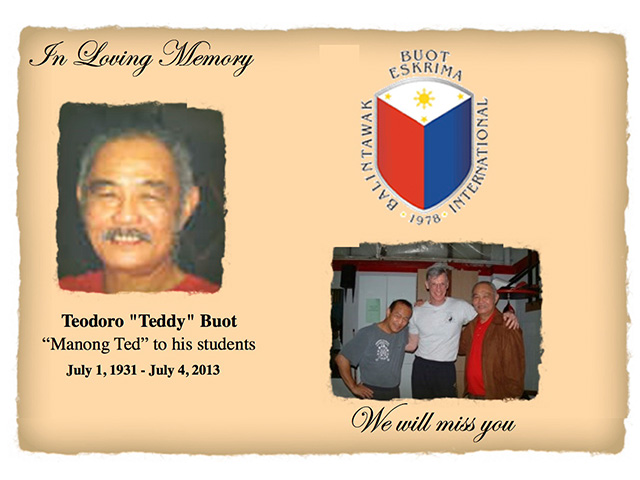 Ted (Teodoro) Buot is the oldest son of Ricaredo Buot and Remedios Abellana. He was born on July 1, 1931, at Cebu City. Although he was both, a mechanical and electrical engineer, he was fascinated by the deep sophistication of the art of Anciong Bacon’s Balintawak Eskrima. After one year of one-on-one training with Grand Master Anciong, Ted was delegated to teach at the Balintawak Self-Defense club on Balintawak street in Cebu City, Philippines. After teaching at the club for 10 years, he moved to the United States in the late 1970’s. 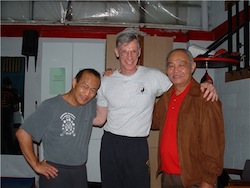 In 1995, Guro Dan Inosanto (my first Filipino Martial Arts Instructor) asked me to look up Ted Buot. Guro said that he would help develop my stick work with the Balintawak System of Eskrima. At that time, I have not heard of Balintawak, but I went out to search for him since he was here in Michigan. After a traditional interview with Manong Ted, we started one-on-one classes the next week. Manong Ted said that Balintawak was a Self-Defense art and was not meant for tournaments.

My first lesson with Manong was him showing me how the Balintawak blocks and strikes look. He could tell by my face that I did not think it would work. He proceeded to have me try to hit him. I could not touch him, but he was able to hit my arms, legs, and accurately (1” away) do head shots. All of that with him controlling my stick. I could not block anything. After wiping the tears from my eyes (from laughing at myself), I was a believer that Balintawak has something to offer. He did not believe in drills. He taught us in a random order (Corridas) of moves. It was harder to learn, but in the long run, it made the student ready for combat awareness and adaptability.

Manong was a very patient instructor. I was extremely grateful, because this system was difficult to learn. His famous words to me (if I did not practice enough) were: “Dave, I have given it (technique) to you and now you are giving it back to me.” It was not only the technique, it was the awareness and timing in executing the technique that he wanted us to develop. He was a stickler in doing the techniques correctly. Even if you were just casually showing him the issue you may have with a Balintawak move. He believed that a student should always do the movements correctly regardless. This way, it will be ingrained in your muscle memory. He was absolutely right. As time went on, I found that without the proper mechanics, the economy of motion would not fit the timing necessary to be effective. Manong always stressed Timing and Coordination as the major attributes focused in Balintawak.

As for ranking or titles, Manong did not believe in giving them out to students. Balintawak is an ongoing development of your abilities. However, he did consider his students as either Beginners, Intermediate, or Advance. But he would not mention it to the students. After about four years of training, I asked Manong what level have I attained. He said let’s see. After being popped a few times on the arms “hard” (where I could feel the shock on my ribs), my question was answered. It was not something you could put on paper or any other material medium. It was your ability to perform that showed your level in Balintawak.

Manong Ted admitted to me that he did not know all the Kali / Eskrima / Arnis systems. But he could counter any of the other systems I showed him. He had the ability to adapt and overcome any adversity. He was very close to his instructor, GM Anciong Bacon. In turn, Manong was very personal and cared for his students. He did not hold back in explaining and showing us what he knew in Balintawak. I am very grateful for having trained with Manong for 10 + years. I am also very grateful that he has given me permission to film instructional DVDs of the Balintawak System as it was taught to him and as he passed it down to his students. Even between his stroke, in December of 2005, and his passing July 4, 2013, we would still get together and go over my DVDs and other details and stories of his days in Cebu.

I miss the good times we had training and talking. It was serious training but we had fun and laughter with me trying to do the complex timing moves.

Manong Ted, your legacy will not be forgotten.