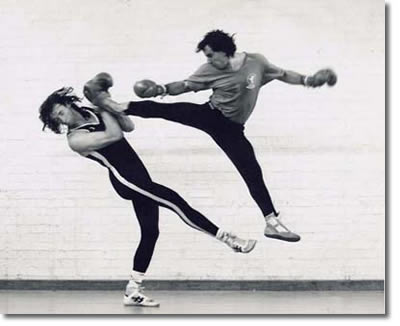 Savate (aka Boxe Francaise) is the fighting art from France. It came out of various systems of street fighting in the late XVIII century, but exploded in popularity around 1820. To date, the origins of this system of combat are unclear, but traces of its roots can surely be found in Pancracia, and even all the way back to the fighting systems of Sumeria.

Originally, Savate covered all ranges of combat, from stick and staff fighting, to punching and kicking, grappling and throwing. Today, all other ranges are taught separately, with the exception of Boxe Francaise (the ring sport) which uses only percussive movements (punching and kicking).

In Europe, Savate, with its elusive and graceful, yet powerful kicks delivered in the three lines, and its sophisticated hand techniques combined with awesome footwork, is considered to be one of the most efficient fighting systems in the world, both as a ring sport and a system of self-defense.