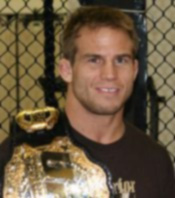 Sean has trained extensively at the Minnesota Martial Arts Academy since 1994. Sean is currently the UFC Lightweight World Champion, only the second person in history to ever hold the lightweight title. He has wrestled since the age of 7 and has over 400 matches. He also has trained and competed in Brazilian Jiu-Jitsu, submission grappling, and mixed martial arts since 1998. His fight name is “The Muscle Shark” given to him by Japanese fans before fighting in Pride Bushido. Sean holds an Associate Instructorship in Combat Submission Wrestling from Erik Paulson. He is a consummate coach with an eye for detail, and a passion for his students and fighters. More info about Sean can be found on his website at www.seansherk.com
UFC World Lightweight Champion
courtesy of Minnesota Martial Arts Academy
http://www.mmaacombatzone.com/