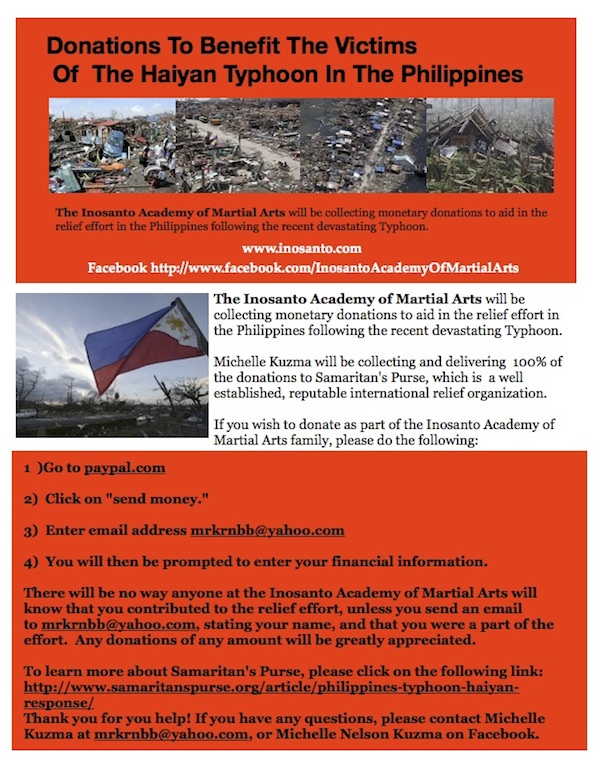 The Inosanto Academy of Martial Arts will be collecting monetary donations to aid in the relief effort in the Philippines following the recent devastating Typhoon.

Michelle Kuzma will be collecting and delivering 100% of the donations to Samaritan’s Purse, which is a well established, reputable international relief organization.

If you wish to donate as part of the Inosanto Academy of Martial Arts family, please do the following:

4) You will then be prompted to enter your financial information.

There will be no way anyone at the Inosanto Academy of Martial Arts will know that you contributed to the relief effort, unless you send an email to mrkrnbb@yahoo.com, stating your name, and that you were a part of the effort. Any donations of any amount will be greatly appreciated.

To learn more about Samaritan’s Purse, please click on the following link:
http://www.samaritanspurse.org/article/philippines-typhoon-haiyan-response/
Thank you for you help! If you have any questions, please contact Michelle Kuzma at mrkrnbb@yahoo.com, or Michelle Nelson Kuzma on Facebook.

MANILA — The Philippine Red Cross estimated that more than 1,000 people were killed in the coastal city of Tacloban and at least 200 in hard-hit Samar province when one of the strongest typhoons ever to make landfall slammed into the country.

Gwendolyn Pang, secretary general of the Philippine Red Cross, said the numbers came from preliminary reports by Red Cross teams in Tacloban and Samar, among the most devastated areas hit by Typhoon Haiyan on Friday.

“An estimated more than 1,000 bodies were seen floating in Tacloban as reported by our Red Cross teams,” she told Reuters. “In Samar, about 200 deaths. Validation is ongoing.”
Read more at http://www.toledoblade.com/World/2013/11/09/More-than-100-dead-in-typhoon-onslaught-in-Philippines-as-storm-aims-at-central-Vietnam.html#3QUSKTZGgw0phuaZ.99

One of the most powerful typhoons ever recorded, Haiyan (Yolanda in the Philippines) has caused at least 10,000 fatalities, according to local officials.

Haiyan was the second category 5 typhoon to strike the Philippines this year.

“The devastation is, I don’t have the words for it,”Interior Secretary Mar Roxas said, according to Reuters. “It’s really horrific. It’s a great human tragedy.”

The organizations below are mobilizing and deploying major disaster relief efforts. See how you can lend support, and check back for further updates.

World Food Programme
WFP has allocated an immediate $2 million for Haiyan relief, with a greater appeal pending as needs become apparent. The UN organization is sending 40 metric tons of fortified biscuits in the immediate aftermath, as well as working with the government to restore emergency telecommunications in the area. Americans can text the word AID to 27722 to donate $10 or give online.

Red Cross
Emergency responders and volunteers throughout the Philippines are providing meals and relief items. Already, thousands of hot meals have been provided to survivors. Red Cross volunteers and staff also helped deliver preliminary emergency warnings and safety tips. Give by donating online or mailing a check to your local American Red Cross chapter.

The Philippine Red Cross has mobilized its 100 local outposts to help with relief efforts.

World Vision
The organization is providing food, water and hygiene kits at the evacuation centers. World Vision was also still actively responding to last month’s earthquake in Bohol, which luckily was not struck by the eye of the storm.

ShelterBox
ShelterBox provides families with a survival kit that includes a tent and other essential items while they are displaced or homeless.

UNICEF
Anticipating that children will likely be among the worst affected by the typhoon, UNICEF is working on getting essential medicines, nutrition supplies, safe water and hygiene supplies to children and families in the area.

Salvation Army
100 percent of all disaster donations will be used for relief efforts and “to immediately meet the specific needs of disaster survivors.” Text TYPHOON to 80888 to Donate $10 or give online.

Save The Children
The organization has sent relief kits for children and families, including household cleaning items, temporary school tents and learning materials.

Doctors Without Borders
The organization is sending 200 tons of medical and relief items, including vaccines, tents and hygiene kits.

Operation USA
The Los Angeles-based nonprofit is sending much-needed water purification supplies to victims and seeking corporate partners to help with delivery. Donate $10 by texting AID to 50555 or give online.