Growing up in the art of Kodenkan Danzan-Ryu Jujitsu, I had heard the name “Professor Wally Jay” before, but I did not actually meet him until I was in my mid-twenties and training with Guro Dan Inosanto at his Culver City school on Washington Blvd.
Sometime in the early 1980’s, Professor Wally Jay happened to be in the area and stopped by to see “Bruce Lee’s student,” Dan Inosanto. It was one of those “after-class moments” and Professor Jay happened to use me to demonstrate how his Small Circle Theory could be applied to virtually all techniques to increase their effectiveness and speed of application. To say that he flung me around effortlessly would be an understatement! Not only was I impressed with the intense pain, speed and effectiveness of the locks, I was even more impressed by the flow the Professor was able to do. The lock flows seemed to fit in perfectly with the weapons flow that I was learning from Guro Dan. 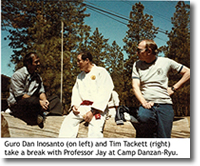 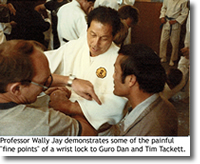 Professor Wally jay demonstrates some of the painful
“fine points” of a wrist lock to Guro Dan and tim Tackett.

Over the next several years Prof. Jay visited the Inosanto Academy on many occasions to hold seminars and share his expertise with Guro Dan and his students. It was easy to tell that Professor Jay respected Guro Dan and his accomplishments. From Guro Dan’s side, Professor Jay was like a grandfather. I had the pleasure of hosting Professor Jay while he was in Los Angeles. He stayed at my apartment in Santa Monica, and we had some great times as he reminisced about growing up in Hawaii, training in Jujitsu with Prof. Henry S. Okazaki, his early years in Judo, and the evolution of his Small Circle system of Jujitsu.
In 1988, Professor Jay asked me to be in his book, “Small Circle Jujitsu,” published by Ohara Publications. I had the privilege of being on the receiving end of many of his techniques. He also asked me to write the actual technique descriptions for all of the photo sequences.
I have reproduced the short introduction from his book, so that interested students can learn about Professor Jay’s history and background in more detail:
Professor Wally Jay is the Grandmaster of Jujitsu America. He is ranked as a tenth dan in jujitsu and a sixth dan in judo. In 1969 he was inducted into BLACK BELT magazine’s Hall of Fame. Born in Honolulu, Hawaii on June 15, 1917 of Chinese descent, Jay spent his early years as a sheltered and frail child. At the age of 11, he turned to a community boxing program in the hope of gaining much needed confidence, direction, and sense of personal security.
Under Jimmy Mitchell he learned the basics of boxing and a great deal more. Perhaps this is where he learned how great an impact instructors can actually have on their students–a lesson not lost on the talented Chinese-Hawaiian over the years, nor forgotten as he progressed through his martial arts studies.
In 1935 Jay turned to jujitsu under Paul Kaelemakule. Then in 1938-39 while attending Oregon State College, he studied boxing under coach Jim Dixon. By 1940, he was back in Hawaii, studying jujitsu again. This time, howeve, it was under the tutelage of Juan Gomez, a top disciple of Henry S. Okazaki. By 1944, Jay had received his first-degree black belt in Danzan Ryu jujitsu, and the following year, he was awarded his second-degree black belt along with his instructor’s certificate from Gomez. Since it was mandatory for the new instructors to know massage and how to care for injuries, Jay also received his masseur’s diploma from Okazaki.
It was also during this time that the young marital artist began studying judo under Hawaiian champion Ken Kawachi. It is Kawachi whom Jay credits with stressing the use of decisive wrist action that would later become one of the primary focal points in his Small-Circle Theory Jujitsu. 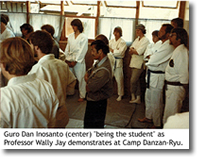 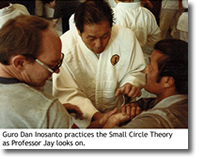 In 1950, Jay moved form Hawaii to Northern California where he began teaching judo. While the first few years were difficult, he went on to excel in judo as an instructor and a coach, so much so that within a decade, he had produced many local, regional, national, and international champions in the traditional sport. By the early 1960s, Jay received his third-degree black belt rank in judo and was also named Judo Coach of the Year.
In 1962 Jay attracted the attention of a 22-year old martial artist from Seattle named Bruce Lee. Lee was amazed how someone with little formal training in judo could go on to produce champions. However. from the many long hours that Lee spent at Jay’s dojo (training hall) with friend Jimmy Lee, the legendary martial artist saw the value of Jay’s broad background in the fighting arts. Jay had adopted various techniques from boxing, wrestling, judo, kung fu, weightlifting and jujitsu, and brought them together in what he called his Small Circle Theory Jujitsu. Like Jay and his innovative instructors before him, Bruce Lee knew that talent, technique, and style knew no traditional boundaries and that excellence carried no single banner or flag. The three martial artists spent many long hours exchanging theories, fighting principles, and techniques, and over the following years, a strong bond of trust and friendship developed. As their reputations grew, they remained friends, and while Bruce Lee went on to take Hollywood, Hong Kong, and the martial arts world by storm, Wally Jay established the ten principles that would set his mark in the world of jujitsu.
Since 1979 Professor Wally Jay has devoted all of his time to Small-Circle Jujitsu instruction, holding clinics in England, France, Norway, Sweden, West Germany, Holland, Singapore, Tahiti, Costa Rica, Mexico, Australia, New Zealand and Scotland, as well as throughout the United States and Canada.
Jay was also the team captain of the U.S. representative team that took part in a cultural exchange program to the People’s Republic of China. In 1985, his exhibitions with Jim Silvan at the International Wushu Championships in Xian, China, drew high praise and applause from those present. It was after that demonstration that Jay was singled out by three prominent Asian sports magazines, and as a result, was later invited to return to China.
From his lifetime of contributions to jujitsu and the martial arts, Jay has received numerous honors and awards. He is a recipient of the National AAU Bud Estes Pionieer Memorial Award, has had a classroom named after him in Alameda, California, and in 1965, was named the city’s Man of the Year. For his efforts in his community, Jay also received the Mayor’s Medallion, joining such prestigious company as the late President John F. Kennedy and the late Minnesota politician and former Vice-President Hubert Humphrey.
In 1982 Wally Jay was honored at a dinner in Waikiki, Hawaii, by former students, with a long list of notable friends in attendance, including Richard Kim, Ed Parker, Pat McCarthy, Ken Kawachi, Don Jacob and Juan Gomez. Leonard Lim, representing the Governor of California, presented Jay with a special Governor’s Proclamation honoring his service and contributions to California. With all these honors and awards the truly humble and talented martial artiest remains firm in praising the many other pioneers in the field who have helped or influenced his own career–pioneers, who Jay says, deserve recognition as well.
In this regard, Wally Jay is behind a drive to find a sponsor to support a “Jujitsu Hall of Fame” in order to recognize those who have contributed so much to the betterment of this fighting art. Jay is sincerely interested in giving something back to the art he feels has given him so much. 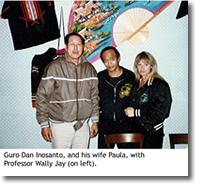 Guro Dan Inosanto and his wife, Paula, with
Professor Wally Jay (on left) 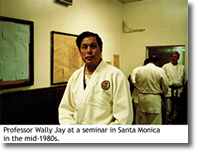 Professor Wally Jay at a seminar
in Santa Monica in the mid-1960?s

In addition to maintaining an active and full-traveling seminar schedule, Professor Wally Jay serves as the technical advisor to a number of national and international jujitsu organizations and associations. He is a grandfather several times over and presently resides in Alameda.

THEORY OF THE SMALL CIRCLE: 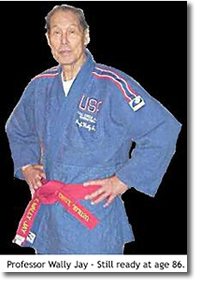 This principle is the essence behind the entire system. The centuries- old traditional big circular movements are caused by the push or pull action of the wrists. When applied, these larger circular movements allow the attacker a larger area of escape. Conversely, the small circular movement caused by the push and pull wrist action, allows the attacker less time and less room to escape. This condensed movement speeds the defender’s application time and reduces the reaction time of the attacker. The speed is directly related to the size of the circle. The tighter and smaller the circle, the quicker the application and the smaller the area of escape.

From No Pain To Pain Involves a Tiny Movement:

The intensified action to a smaller base creates excruciating pain and it can be pinpointed more accurately because of the wrist action of push and pull. The defender is able to control the degree of pain he desires to inflict. From no pain to pain involves a tiny movement of the finger, wrist or palm. It may be a controlled submission hold, which may be painless when the hold is released, or result in broken bones or dislocated joints when the action is intensified, or one that produces partial strangulation or unconsciousness depending on the defender’s discretion.

The physics of this principle are actually quite simple. (See diagrams 1a. and 1b.) The forces behind classical jujutsu come from one direction, whereas this system applies force from two opposite directions causing spiralling and tightening circle.

NOTE: Earlier this year (2003) Professor Wally Jay officially retired at age 86. His son, Leon Jay, is an accomplished martial artist in his own right and has inherited the Small Circle System from his father. 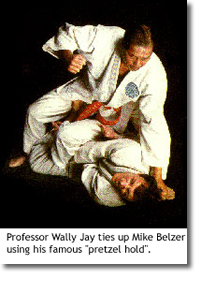