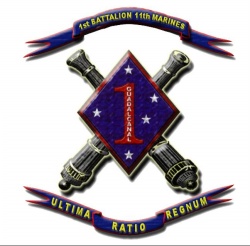 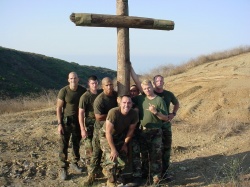 These photos include a gripping story of Marines who carried a wooden cross to the top of a hill at Camp Pendleton. Ray Mendoza (3rd from left, hugging the cross) was memorialized on the front page of the “B” section of the “Los Angeles Times” about six months ago as the soldier least expected to be killed in action. He was a comissioned officer (Captain at the time, and later promoted to Major, posthumously) who was extremely courageous and loved by his troops. Also included in the photo is LCPL Robert P. Zurheide, Jr. who is the 1st person on the right side of the cross, peering from under the arm of another marine who was also killed in action. Following is the story from Chaplain Scott Radetski (in front of the cross in the middle of the photo).

Before we left for Iraq, we muscles a fourteen-foot wooden telephone cross to the top of San Onorfre Mountain. One single individual could not have carried this weight to the top, but together, seven of us accomplished the difficult task. This marker eventually became a permanent marker of remembrance. Countless Marines and sailors braved the journey to the top, carrying with them a stone of remembrance. A permanent 1st Marine Regiment Diamond with southern Cross was laid to rest at the foot of the cross.

LCPL Robert P. Zurheide, Jr., one of the original seven men who carried the cross to the top, was killed in Iraq. The night he died, I carried his lifeless body off the truck and laid him to rest, as the corpsmen worked to save the wounded Marines. Several days later, on the very spot where three marines died, including Zurheide, four Marines were baptised. Robert had a son born four days after he died. We braved the journey he made a year ago, to the top of San Onorfre Mountain, to dedicate his son to the Lord. His son, Robert P. Zurheide, III, will touch the same cross his father carried up the hill.

The burdens of war are far-reaching, dulled by the passage of time. Alone, they are overwhelming, but together they can be moved. For this young lad, whose dad gave his all for the freedom of many, our prayers are that as Robert Zurheide III grows, he will know that his Father in heaven, God, draws near to those who have no earthly fathers.