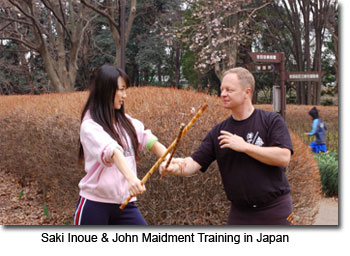 John Maidment is a registered nurse, photographer, and martial artist with an Associate Level in Filipino martial arts and Jun Fan Gung Fu and an instructor rank in Maphilindo Silat under Guro Dan Inosanto, as well as instructorships from different organizations under different individuals.  He has written several student manuals for his school, as well as handling everything else: posters, ads, newsletters, brochures, business cards, flyers, etc., which were all done by typing, hand drawing or on electraset (rub-on lettering).  He kept attendance records and financial records, with the assistance of Valerie Smith, who for awhile was his training partner, and eventually became certified.

CPB:  How did you become interested in the martial arts?
JM:  I was getting bullied in school, and started training in judo.  I later added aikido and karate.  During this time, I became aware of Bruce Lee through the movies and martial arts magazines.  As I began to educate myself on the different martial arts, I became disillusioned with karate.  I had also left judo and aikido, and began training on my own and with others.  Eventually, in 1978, I travelled to Aspen, Colorado to attend a one-month camp, where for two weeks I trained under Remy Presas in modern Arnis, and two weeks under Richard Bustillo in Filipino martial arts and Chinese kickboxing.  Two years later, I went to California and met Sifu Dan Inosanto for the first time, and since then, I’ve concentrated on my training under Guro Inosanto and instructors associated with him. Through the years, I have seen the curriculum evolve to incorporate many martial art styles and systems, all of which are street-effective, and while different in approach, share many similar principles and concepts.  Guro Inosanto  will often illustrate various options from these arts, without blurring their origin.    One of the things that blew me away was the introduction of Thai pads to our training.  I had not seen them prior to a trip to the Filipino Kali Academy in the early 80’s.  As I reflect back on this, it doesn’t surprise me because Guro Inosanto was always looking and researching other martial arts to find the effectiveness of techniques, drills and training methods, including the use of equipment.  Guro Inosanto was a pioneer in exposing his students to the concept that is now called Mixed Martial Arts.  Even in the 1980’s, during sparring we were flowing in and out of grappling and kickboxing, and occasionally even training with weapons would be included in the mix.

CPB: I’ve heard you were determined to make it to seminars, and even managed to make it to one in spite of being waylaid by an auto accident!
JM: During the time that I was frequently attending seminars, I would often push myself, sometimes driving for 12 hours straight, with minimal breaks, even if I’d worked the day before.  On one certain occasion,  I pushed too far.  There was a seminar in Montreal.  I’d gotten off that morning from work, stayed up all day, and started to travel to Montreal in the evening.  By 5:00 a.m. the next morning, despite several periods of rest, I fell asleep at the wheel and managed to ‘total’ my truck.  Luckily, I was not injured.  The police gave me a ride to the nearest major city.  From there, I took the bus to Montreal, and made Guro Inosanto’s seminar on Sunday.

Another interesting Montreal story happened on a Friday when I was enroute to a seminar on Friday, and the engine blew on my van.  In order not to miss the seminar, I got towed to the nearest town where I purchased another vehicle with my credit card!

CPB: Do you think being adept at martial arts has helped you in your career as a nurse?
JM:  Yes.  I work in the emergency room, and have had to take down people on numerous occasions.  One particular incident in Toronto involved a drunken individual who came in and threatened to kill his pregnant girlfriend, and threatened to rape the front desk nurse as well.  They called me in, and when he came at me I met him with several leg kicks, which didn’t hurt him, but stopped him.  All the other incidents were restraints, such as choke holds and wrist locks.  Once, a psychiatric patient was beating up a nurse on the elevator.  I intervened and was able to take him down with a choke hold and arm bar, until he was sedated by other nurses.

CPB:  How have seminars changed from the 80’s and 90’s to now?
JM: In the early days, people were not as exposed to different martial arts, so you’d see their mouths drop open in amazement during Guro Inosanto’s seminars.  It was like turning on your television set and getting live feeds from 30 different channels at once.  There were more skeptics then, because for instance, traditional karate was still quite prevalent, and the belief was that you had to be more robotic to be a ‘real’ martial artist.  For us to be training in sweats and sneakers and bouncing around on the floor was still a phenomenon that many people were not used to.  People training back then were more interested in learning and exploring the arts, while over time, it seems like  more people have become more  interested in stealing the technique and incorporating it into their curriculum, or opening a school and not necessarily giving credit where it’s due.  A small portion is interested in actually, legitimately, pursuing instructorship.

CPB:  What has kept you interested in training with Guro Inosanto for over 20 years?
JM: The main reason I stayed with Guro Inosanto is that I have found him to be the most honest and knowledgeable person in the martial arts that I’ve ever met.  For example, if he shows you a move, and it comes from another martial artist, he will tell you where it came from.  With him, there is absolutely no attempt to misrepresent himself or his knowledge.  I have also been at other seminars or training sessions where he has been a student along with the rest of us, and he approaches the training without prejudice and is simply happy to be learning and training.  This has served as an inspiration to me.

CPB:  What influenced you to move from Canada to the States?
JM:  Before moving to America, I had frequently attended seminars throughout the U.S.,  including the Academy in Los Angeles.  So, by 1996, with Canada’s health care system in turmoil, and nursing jobs being scarce, I decided to pack up and leave.  Eventually, I secured work in Los Angeles and have been here since 1997.

CPB:  Were there other influences or individuals in your martial arts career that you would like to mention?
JM:  Obviously, all my former and current students; my seniors at the academy, and on the seminar circuit; and the other instructors whom I have been privileged to train under, including Guro Paula Inosanto, who has supported me and provided me with opportunities to grow as a martial artist.  At times, she went out of her way to insure that myself and any students I’d brought with me, were introduced to the seminar host, and made to feel welcome.  Being coached by her was enjoyable and productive because she would not take it easy on me, but took the time to teach the technique if I didn’t know it.  More recently, she has also encouraged me to pursue my newfound interest in photography.

CPB:  What advice do you have for others regarding training?
JM:  Try not to burn yourself out.  Re-evaluate your goals and train accordingly.