The Filipino Martial Art community mourns the loss of one of the greatest bladed warriors of the 20-century.
Grand Master Emeritus Leo M. Giron the founder of the world-renowned Bahala Na Filipino Martial Arts Association passed away on May 21, 2002 due to a heart condition.

Leovigildo “Leo” Miguel Giron was born in Bayambang a little barrio in the province of Pangasinan, Philippines on August 20, 1911. Young Giron first started his training in the Filipino arts because of the neighborhood children and bullies that would take advantage of him and others. Giron soon learned, however, that if he stood up to hem and made one of them cry, the rest would run away and leave him alone.

All of Giron’s early training was with family members. They would train under the mango tree late at night. Giron would first hold the lantern for the training until his father had asked the teacher to train young Giron. His training started in 1921 and lasted until 1926 until Giron would set sail on the USS President Lincoln for America.

Giron landed in San Francisco in November 1926 and was picked up by his cousin and brought to Stockton, California. During this time Stockton, California had the largest population of Filipinos in American that it would earn the nickname “Little Manila”. Young Giron would work in various areas in Stockton until in 1929 when he would move to Meridian, California to pick prunes. During this time he would meet a many by the name of Flaviano Vergara. Vergara was from the town of Santa Cruz in Ilocos Sur Luzon, Philippines. Vergara was the top student of Dalmacio Bergoina who defeated the great champion Santiago Toledo. Giron and Vergara would “play” deep in the orchards so no one would be able to watch the secret training of the deadly art of Arnis / Escrima. There training would last from 1929 until 1932. Vergara and Grion would meet again directly after t he outbreak of World War II. They would train again for the last time from October 1942 until January 1943. 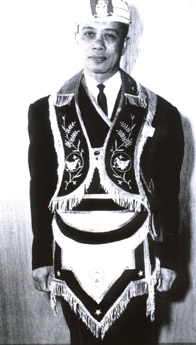 On September 24, 1942 he was inducted into the United States Army and would be attached to the 2nd Filipino Infantry Regiment and would later be assigned to the famous 978th Signal Group and The Allied Intelligence Bureau. This was a select group of men that served as secret operatives for General Douglas Macarthur. Then Sergeant Leo Giron would be dropped behind enemy lines by submarine nearly one full year before any America Soldier would set foot on Philippine soil. It was there assignment to search out the enemy, extending lines of communication, securing vital weather data and obtaining military information and not to be detected by the enemy. Sergeant Giron lead a group of American and Philippine soldier’s through the most hazardous conditions of Would War II deep in the jungles of the Philippines. Many encounters are documented in the United States Library of Congress in Washington DC. Because of his contributions during World War II Sergeant Giron would receive, The Bronze Star Medal, The Philippine Liberation Ribbon, The Asiatic Pacific Campaign Medal, The American Campaign Medal, the World War II Victory Medal and a letter of commendation ordered by the President of the United States of America.

Giron would return to civilian life as World War II hero and a part of America’s Greatest Generation. But, without anyone knowing he would return too live a new and normal life in America as a Filipino American, not pondering on his heroics during the War.

After the war Giron would return to Stockton, California to raise a family and having two daughters Christina and Regina along with two sons Michael and Thomas. 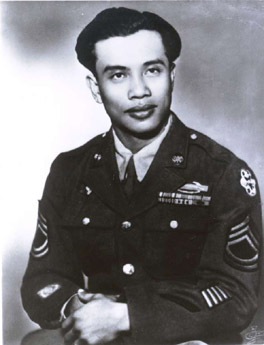 Because of a person back East that had killed several nursing students, most of them Filipino women this would enrage Giron that only if they would know self defense they could have try to subdue this maniac. So in 1968 Leo Giron would open his first licensed Bahala Na club in Tracy California.

In 1970 Grand Master Leo M. Giron and wife Alberta would move to Stockton along with his Bahala Na Club. And in 1973 the first student to graduate from his system would be Stockton born and World Renown Martial Artist Dan Inosanto. Along with martial art greats such as Dentoy Revillar, Richard Bustillo and Ted Lucaylucay. In 1979 the first meeting was called to order of the Bahala Na Filipino Martial Arts Association. Grand Master Giron was the founder and leader of this Association that is governed by a Constitution and by laws.

Grand Master Giron’s contributions to the Filipino Martial Arts in general were enormous. He was known as the Father of Larga Mano in America. A World War II veteran that knew how to use his weapon and will be always remembered as a great man, a humble man, with dignity, love in his heart, a living legend and martial art Icon. He was a super star, he was our star and he was our shinning light of life. He gave us all the liberty of freedom to learn of life and the arts, Equality in having the necessary ability and strength, Fraternity in which the same beliefs in work along with fellowship and family.

Grand Master Giron left us with a legacy that we must all carry on with all of those that would like to share in his system.

Please allow me to quote Guro Dan and Paula Inosanto: 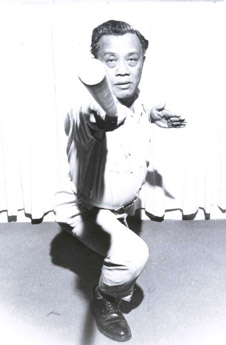 I love this man. Manong Leo was like a second father to Paula and me. Grandpa Leo to our daughter Danielle. He has been my advisor, counselor and Guro. He was a problem solver for me. I could call him anytime and ask for advice and guidance on any problem. He was always there for me, with his wisdom, strength and humor he never failed to help or guide me.

He instilled in me, great pride in being an American Filipino and helped me to gain a deeper understanding and appreciation in my Filipino Culture and heritage by teaching me the Filipino Martial Arts. Manong Leo was instrumental in giving me the incentive to further research, promote and teach the Filipino martial arts to others. Manong Leo was truly a “HERO”, not only to the Filipino people, or the American born Filipino, such as myself, but to for all Americans. His distinguished and courageous service to our county during time of war has always inspired me. Manong Leo influenced, for the better so many so many people. His legacy will live on. His art, in the capable and strong hands of Tony Somera, will thrive and continue to grow and educate the martial art community and all those who study and train in the arts. Many generations to come will benefit from the time Manong Leo spent with us. And while I wish he could have stayed with us a while longer, I thank God that he allowed me the honor and privilege to spend as many years as I did, with one of the kindest, wisest, and humblest human beings it was my privilege to know.
God Bless you, Manong Leo. 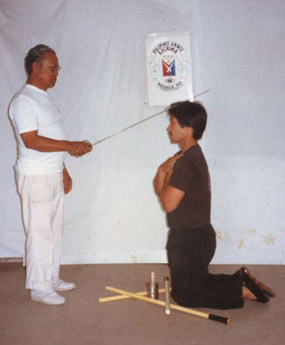 If God made man in his image, he had an outstanding day on August 20, 1911 when he created Leo M. Giron.

I deeply love this great man and I thank God he allowed me to share in his life and art. I will truly miss him but his legacy will live on through us all. He was my teacher and he was my very best friend. 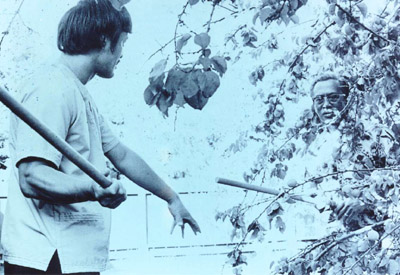